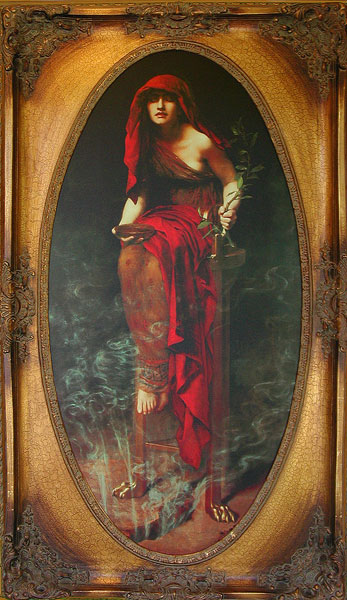 The Story Behind the Painting:
"The Priestess of Delphi" by Hon. John Collier


When Greece played host to the Summer Olympic Games in 2004, much of the world's attention became focused on that ancient nation and its rich history, mythology, legends and architecture. These characteristics are embodied in a famous site dating back to the 13th century BC, known as the Oracle at Delphi, or the Delphic Oracle, in the town of Delphi located in central Greece at Mount Parnassus. "The oracle of Delphi functioned in a specific place, the adyton, or "no entry" area of the temple's core, and through a specific person, the Pythia, who was chosen to speak, as a possessed medium, for Apollo, the god of prophecy." 1 The temple was constructed over an area of rock in which there were fissures and cracks leading from a deep cavern; the fissures allowed vapors of gases contained in an underground stream to seep up through the rock. The Pythia - an initiated female priestess who had undergone extensive training and conditioning that included fasting - would sit in the adyton, breathe the vapors to induce a trancelike state, and prophesize to those who waited to hear her words outside. The prophecies were obscure and cryptic - in fact, one synonym for the word "cryptic" is "Delphic" - and open to very wide interpretation. The gases were "sweet and perfume-y" according to Plutarch - a known statesman and historian, and one of the two Priests of Delphi - and they did not affect the uninitiated in the same way that they would the priestess. Plutarch also noted that the gases were beginning to lessen and dissipate even during his time (in the first century BC.) The Oracle fell out of use in the 4th century AD with the onset of Roman Christianity, and until very recent times the existence of the gases and even the underground spring was in doubt; modern science has revealed that the legend could have indeed been fact. In the painting, "Priestess of Delphi" by The Honorable John Collier, a priestess - the Pythia - is depicted in a trance state, seated over a fissure in the rock through which vapors rise from the underground stream. In her left hand is a sprig of laurel - in Greek mythology, Apollo's sacred tree - and in the other hand a bowl meant to hold some of the water from the stream containing the gases. British artist and writer John Maler Collier (1850-1934) was born in London and painted in the Classicist and Pre-Raphaelite styles. He studied under Sir Edward Poynter in Paris and was influenced by the work of Sir Lawrence Alma-Tadema and Sir John Everett Millais. During his lifetime he was named an Officer of the British Empire (OBE) - granting him the title "Honorable" - and was one of the 24 founding members of the Royal Society of Portrait Painters established in 1891.